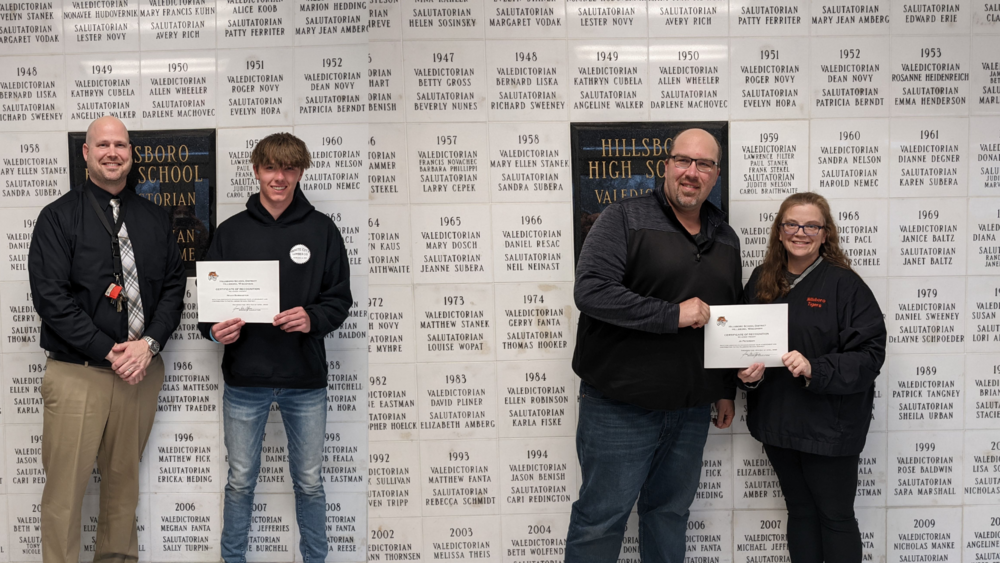 School Board Honors Hillsboro Student and Retiring Board Member

On Monday, April 18, the Hillsboro School Board presented commendations to two individuals who capture the essence of the district's mission in and beyond the classroom.

Noah Burmaster received a commendation from the board in recognition of his exemplifying the Tiger Way in his community.

Burmaster had unknowingly been observed by a district staff member helping another community member at the gas station. Principal Chris Koopman praised Burmaster's actions, and the respect, integrity, and honor he had shown in his community.

Retiring board member Jo Peterson received a commendation for her contributions to the school board, first as a member, and later as board clerk.

Peterson's terms on the board coincided with some of the most difficult years for public schools, and the Nation at large, in recent memory - the COVID-19 pandemic.

Board President Jason Oetzman thanked Peterson for her dedication to students, staff, and the Hillsboro community, and for her thoughtful and measured approach to obstacles that the district has faced over the last few years.

Hillsboro's greatest asset, and greatest honor, remains the students, staff, and community stakeholders that make up our district.